As most who are reading this likely know by now, I recently had a really good race out at the North Face Endurance Challenge at Blue Mountain, Ontario. I went out there with some high expectations for myself and I feel pretty good about my performance, finishing the 80km course in 6hrs42min and winning the race. This is the second 80k I have started and the first I have finished, so I am quite pleased with the result, especially that my time was much faster than I expected.

I’ll give a little recap of how it all went down on my end..

With the race scheduled to start at 5am on Saturday morning, and being a good 8hr drive from Montreal, I took the day off Friday to make my way out there. The village at Blue Mountain is owned by Intrawest (Whistler, Tremblant..) and is thus very commercialized, so arriving there on the eve of the race was kind of a weird experience, with all sorts of things going on and myself being a bit overwhelmed and anxious. I picked up my race package and walked around on my own for a while before deciding to shake off the nerves by heading for a short run to get to know the trails. It was nice to see that the course was nice and runnable (not too steep) and I was excited for the next day, but still had quite a bit of the pre-race jitters going on. One of the things that was making me a little nervous was that I hadn’t planned on anywhere to sleep, and since I was alone at an expensive resort I didn’t want to pay for a hotel just to wake up at 4am! I had half-planned to sleep in my car somewhere, and so decided to grab some food, a coffee for the morning and a newspaper crossword to keep myself busy, and proceeded to find a spot to park my car so I could lay out for the night. In the end I parked in the event-specific lot, about 1km from the start, and was pleased to see one other runner prepping himself to sleep in his pick-up truck. Nice to know I wasn’t alone! So I went ahead and got my camp mat laid out, failed terribly at completing the crossword and crashed around 930pm. Sleep was on and off but mostly pretty comfortable, and I woke up before my 4am alarm feeling surprisingly fresh! (I had spent the previous week getting up earlier and earlier every day to get used to it) I slowly got up, ate a boiled egg and some pita and peanut butter, and headed over to the start area to warm up.

I find it a bit of an eerie experience to have a few hundred people lurking in the dark before a race, obviously nervous about what’s to come and trying to shake off the sleep. It can be difficult to focus on racing when you’re barely even awake. Nonetheless I prepared with a bit of jogging and dynamic stretching, keeping myself away from the crowd and doing my own thing. I am always tempted to watch what others are doing and compare myself to them, and I find it helps to just go off to the side so I can focus on my own preparation, take some deep breaths and relax a little.

With 5am around the corner we lined up at the start, headlamps on so we can complete the first part of the race in the dark. This is actually one of my favourite parts, where you literally can only focus on what’s right ahead of you, running with headlamp tunnel vision, and makes it feel more intense to me. 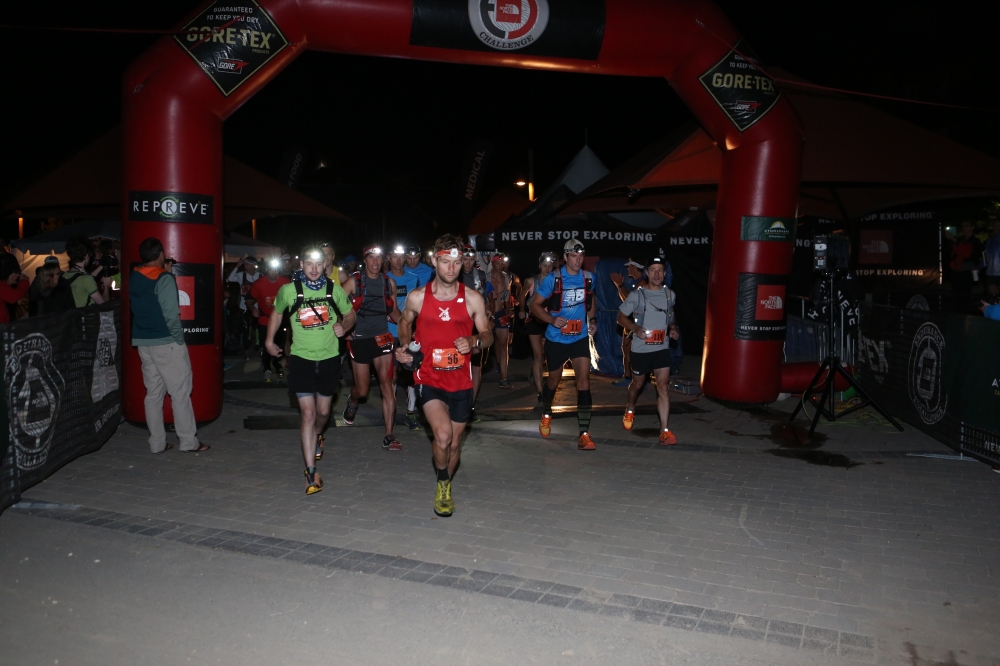 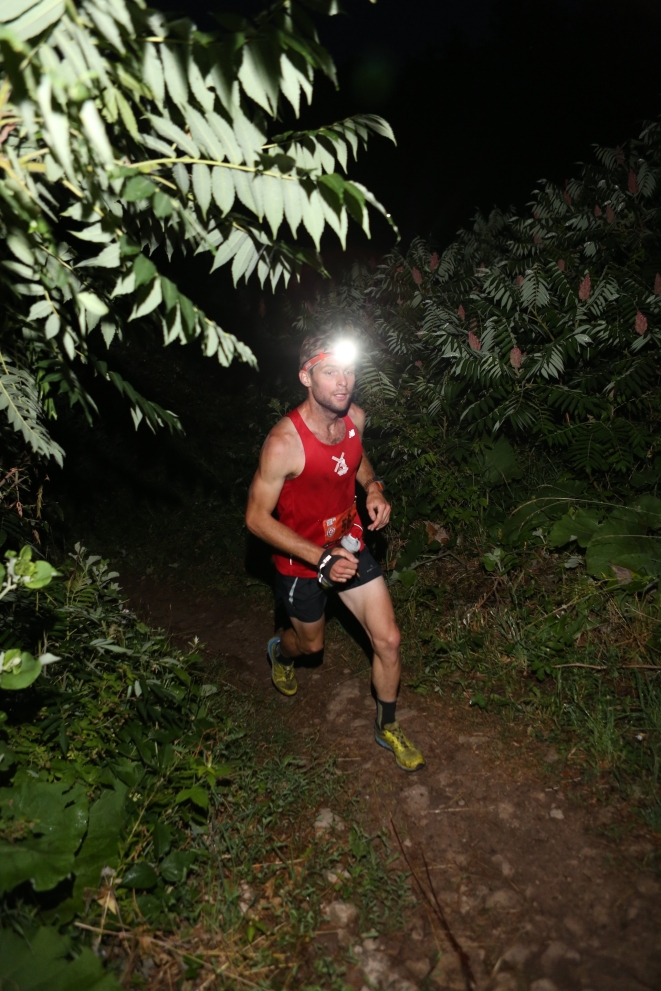 About 20 minutes into the race, top of the first climb.

From the start I was ahead of the others and just settled into a comfortable pace, fresh legs allowing me to easily jog up the first climb to the top of the ski hill, and very quickly finding myself all alone on the course. Basically that was the last I saw of anyone in the 80k race, other than those I crossed on some out-and-back sections, allowing me the luxury of just running my race the way I felt confident, but also giving me that itch that somebody would eventually catch me.

The race consisted of 2 40km laps, and the first one went by quite quickly. I was feeling really good just carrying on at a steady pace and finished the 1st lap in just under 3hrs10min with an average pace of 4:40/km. The end of the loop is straight downhill on a ski run, basically just trying to stay in control while destroying the quads, before heading back up the main climb. Although altitude gain/loss in not a huge part of that course I won’t lie that I struggled starting the second loop. The downhill sucked out all the strength in my quads and I was forced to hike a good portion of the uphills over the following 5-10km. I really thought I was going to lose the race at that point, began doubting myself and came close to quitting. It’s crazy the games our minds can play on us when things get tough, and it took a lot of effort for me to calm those doubts and keep pushing on. I really had to convince myself that all this was normal and that everyone was likely hurting, that I was just having a few bad moments and I could recover from it. 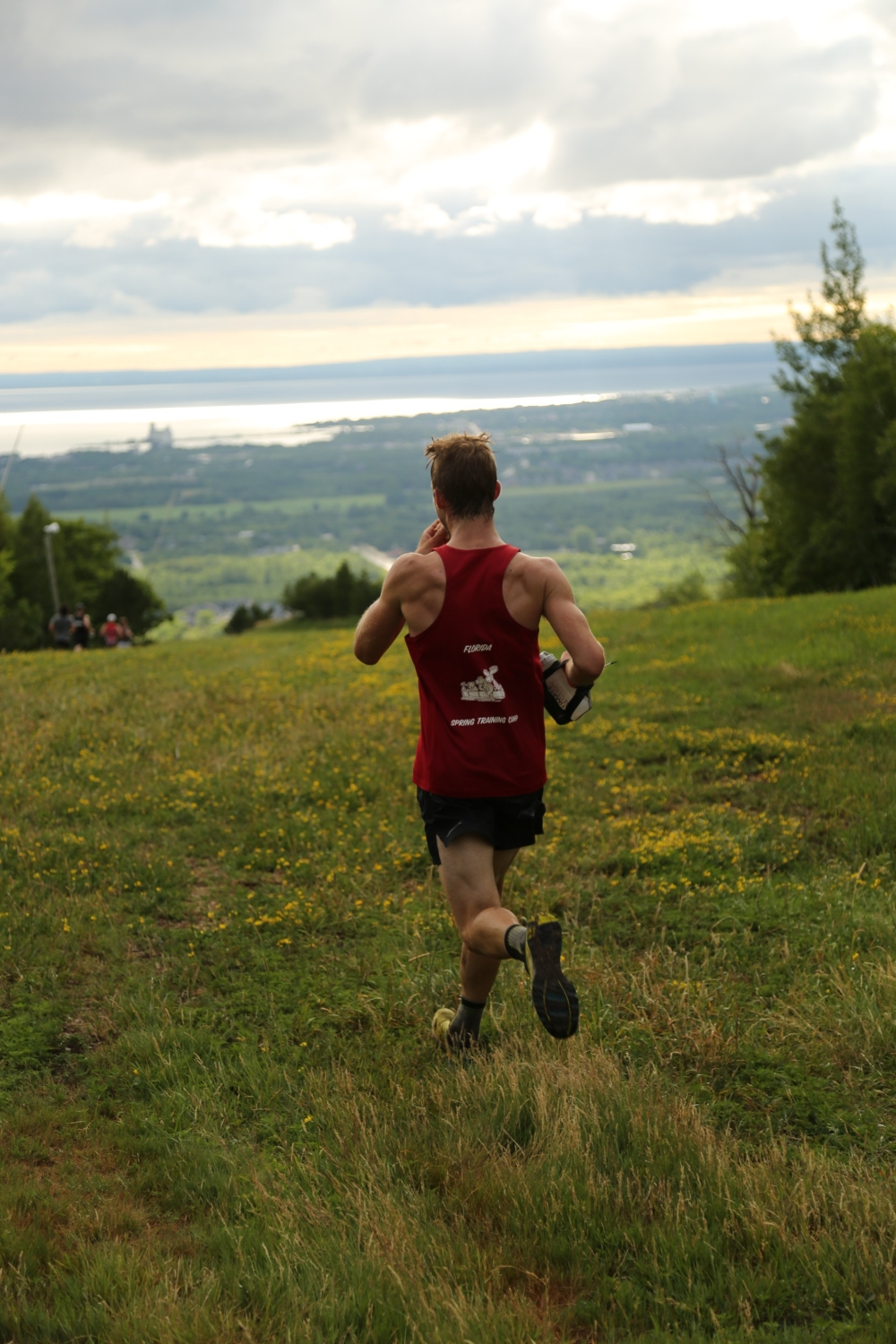 About to head down quad-burner ski run. Overlooking the Georgian Bay.

I managed to push on, helped by all the awesome volunteers and spectators at aid stations who always put a smile on my face, evidently with less ease than on the first lap but even more determination. There was the constant thought that runners behind had just paced better on the first lap and would soon catch me, but I resolved to just keep going at the best pace I could muster, knowing it was all I could do to have my best result. Obviously I would have been bummed to be passed after so much time in the lead, but all I can do is the best I can do! 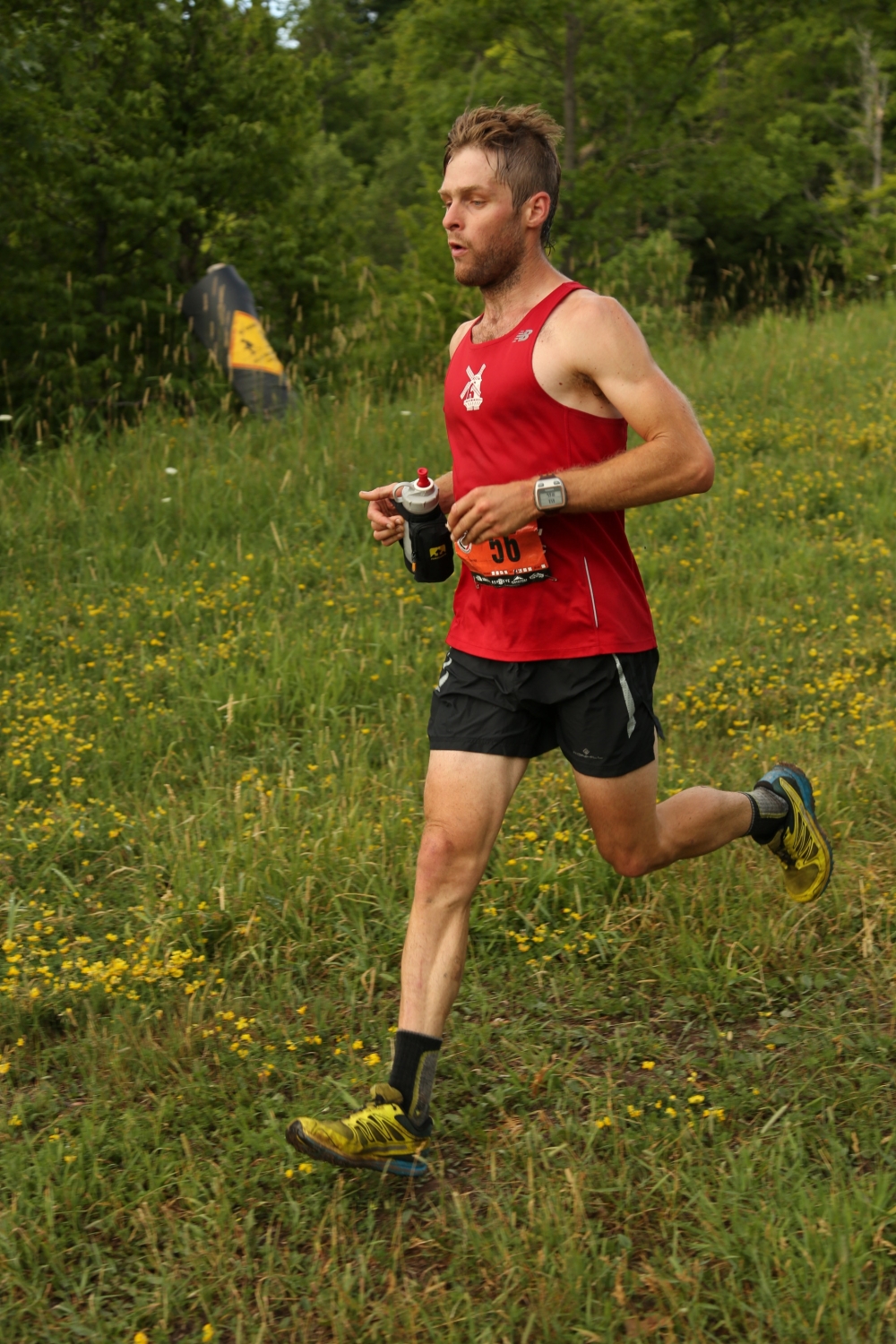 On my way down at the end of the 2nd lap. Hurting but relieved!

In the end I completed the second lap in about 3hrs35min, slowing my overall pace to about 5:04/km. This was more than enough to win the race in a fairly respectable finishing time. More importantly it has given me the confidence that I can actually do these races, dealing with both the physical and mental demands. When I went through the harder parts of the race I started beating myself up, saying I was no good at this and I just wasn’t cut out for ultra racing. The physical part of doing these races is pretty straightforward, can be trained in very concrete ways, but the mental aspect is so much more difficult to prepare. That’s really what gives me the most satisfaction in the end, knowing that I struggled through intense psychological barriers and overcame them. You can definitely see the satisfaction and relief as I cross the finish line! 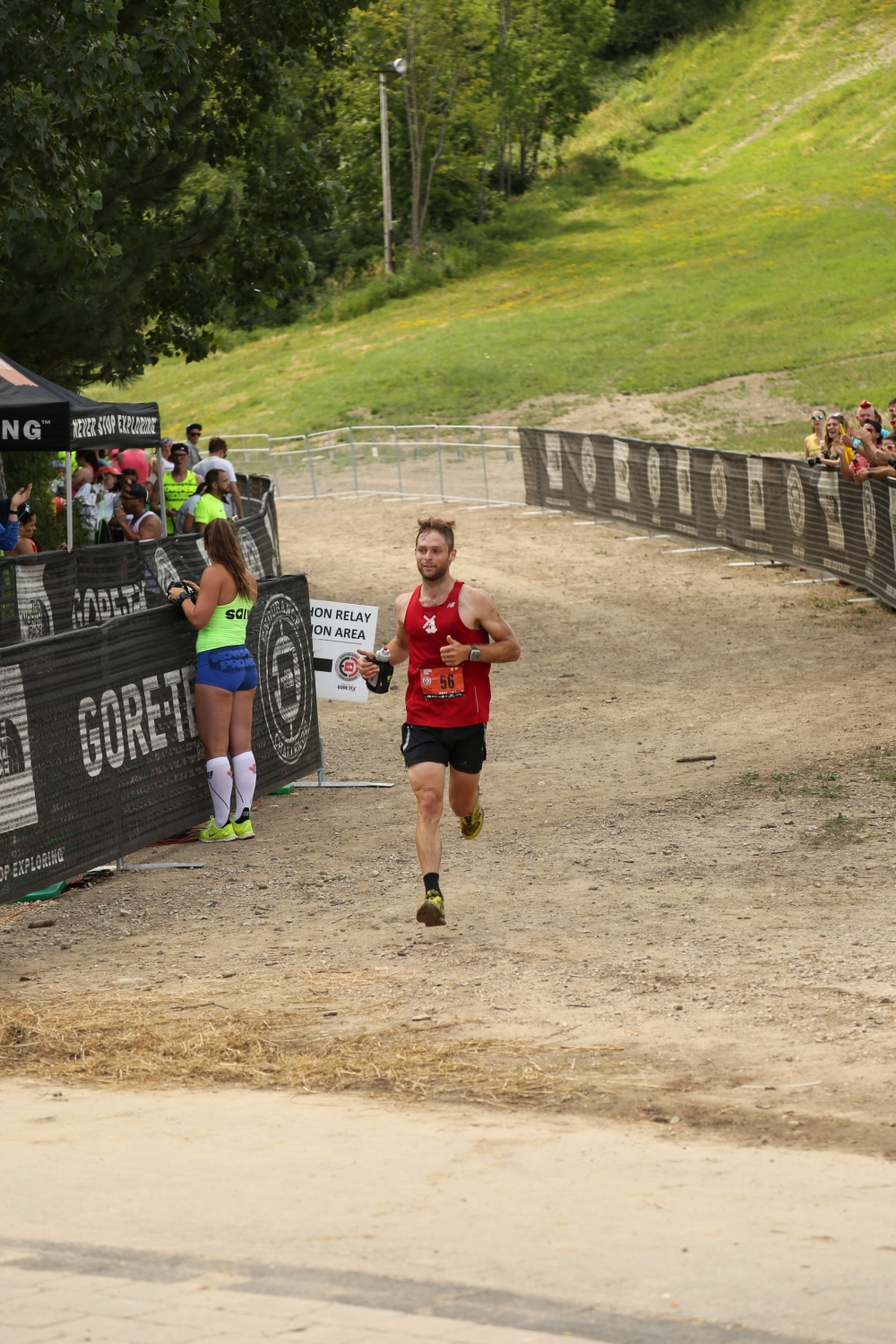 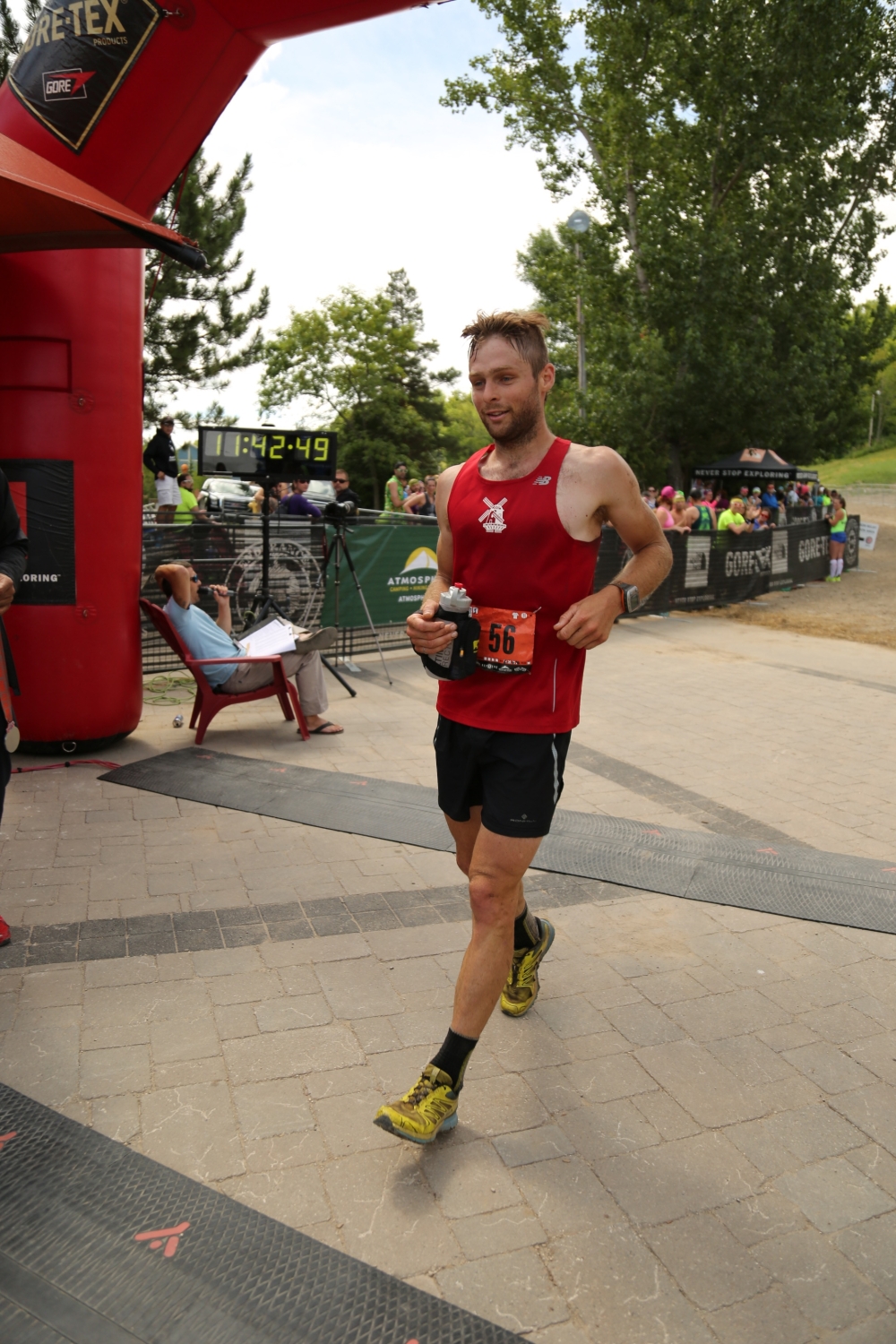 On time for lunch!

Reflecting back on the race, although I am happy with how I did I know I can do much better. I have a lot of work to do but I am quite confident that I can eventually reach a point where that second lap time approaches the first, and maybe even make both faster. With more experience running this length of race I can only imagine how much stronger I will get. This is really exciting to me as I move forward with racing, feeling like I can eventually enter some bigger races and challenge guys that I’ve been reading about and idolizing for the past few years. I don’t know where my limit is but I am more motivated than ever to keep training and be the best I can be. I really feel like I am finding my stride in this sport, and it looks like good things are coming!